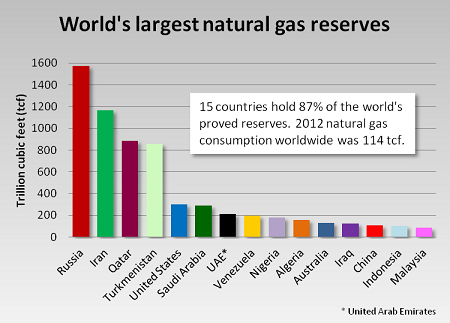 The largest gas fields in the world are in the Middle East and the former Soviet Union occupying the 40 and 35% respectively. This is an unequal distribution as the sum of both approaches three-quarters of the world’s natural gas reserves.

It is also possible to find natural gas in oil fields, about 1 m³ of oil is accompanied by 85 cubic meters of natural gas. If we move to the East, we note that Saudi Arabia has found a gas field capacity 764,554 meters cubic per day. According to studies the daily production of the new field could reach 1.4 million cubic meters. It is estimated that Saudi Arabia is the fifth largest country in the world with gas reserves.

On the other hand, we have Iran and Qatar which share one of the largest gas fields in the world. South Pars corresponds to 40% of Iran and 60% in Qatar. Its reserves are 12 trillion cubic feet of gas, which accounts for 7% of world reserves.

In Iran also found a new deposit is located on Kish Island. Further details are given in the table below:

Top Ten Countries with Largest Gas Reserves in the World

From the table below of top ten countries with largest gas reserves , it is clear indication that Russia has world’s largest natural gas reserves and fields.