Employment or Unemployment, both connotations have their own stigma attached to them. When you are employed, you are always worries about whether you are going to lose the job you have and while a person is unemployed, he worries whether he will work ever again. But these worries do give rise to the self-employed or the entrepreneur as they now like to call them. Once someone is out of a job for a while, they have to start thinking about making money somehow. That gives rise to new businesses, products and services. That is the way of the world and the more businesses invented in the world gives rise to even more professions.
Counting the unemployment rates in a country has been tricky over the years. There are countries often alter the rules of counting someone without a job and excludes them on technicalities. Then there are governments that falsify unemployment numbers in order to instil confidence in their constituencies. Employment rates however, get a completely different treatment. As it is in their best interests, governments of different countries often try to embellish the number of people that are employed in the country. Still, there is a limit to how much things can be altered or embellished and through publications and media awareness; these discrepancies are slowly but surely reducing. we can clearly see that most of them are nations with best economies

Employment rates have been an issue in the current working economies. These questions are always present but they increased three folds after the housing market collapse in 08. Surprisingly, even after causing the biggest economic recession of 21st century, USA is still amongst the list of countries with best employment rates. In fact, North America has two countries in the list as the neighbors Canada, also feature in the list. USA is tenth in the list while Canada is a place above at 72.5%. It is not surprising that 7 countries out of the total 10 are from Europe. The third and only country other country not from Europe is New Zealand which comes in at fifth in the list with 74.3% employment rate. Iceland has the greatest employment rate of any other country with 84.2%. Top four places are European countries with Switzerland, Denmark and Norway rounding off the top five. Sweden, Netherlands and United Kingdom are 6th, 7th and 8th respectively in the highest employment list. 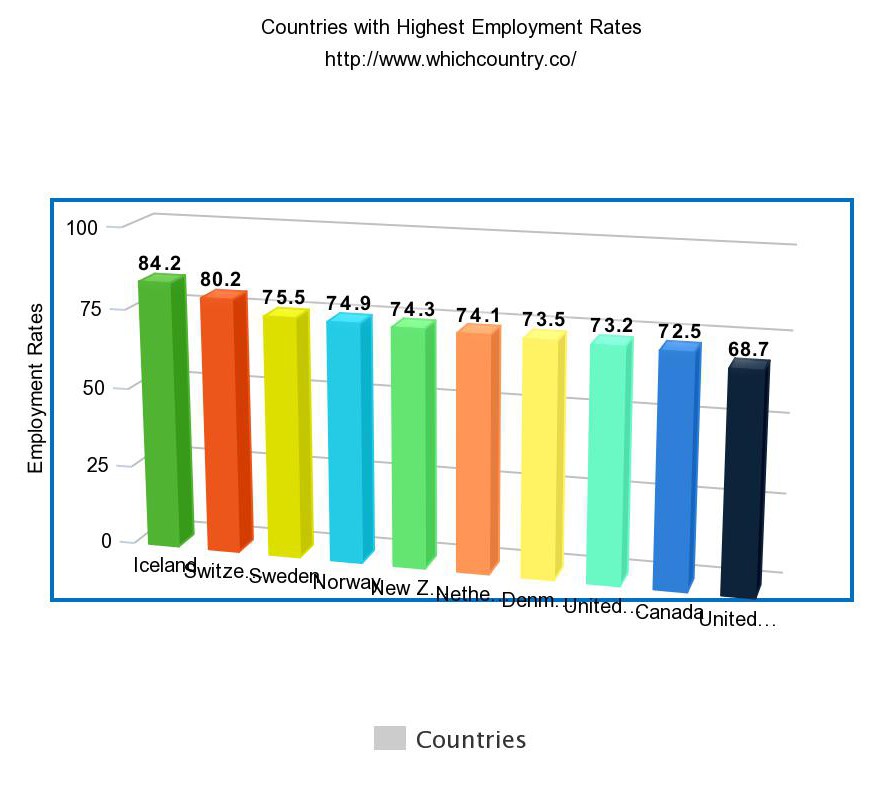 Q : Which country has the highest rate of employed persons in the world?

Ans : Iceland is the nation having the highest percentage of employed individuals in the world with 84.2% .

Which Country Sony Belongs to